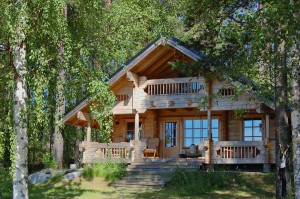 We call them oxymorons: terms with built-in contradictions. George Carlin made fun of ‘jumbo shrimp’; Jerry Seinfeld pointed out the unlikelihood of anything being ‘found missing’ or ‘clearly misunderstood.’
But for some Kenai Real Estate homebuyers, there is more reason to smile than laugh over the new popularity of a formerly miniscule part of the home loan market: what I call ‘mini jumbo’ mortgages.
That’s not the name Wall Street Journal writer Lisa Selin Davis used in a fascinating article in their Mansion section earlier this month. She called them ‘starter jumbo’ loans in a nod to their popularity among younger, upwardly-mobile borrowers. But whether you call them that, mini jumbo mortgages, or just jumbo mortgages, Alaska Real Estate homebuyers may well find increasing availability for home loans above the Freddie Mac and Fannie Mae limits—but still under $1 million.
“Loans at the lower end of the jumbo market are on the rise,” writes Davis, “…driven…primarily [by] the rebounding real-estate market.” Although the issuing of higher-ticket jumbo loans has been on a slight decline since the start of the year, those between $417,000 and $625,000 have jumped from 19% of jumbo loans in 2009 to a full 29% last year.
Corelogic echoes the theme, pointing to the fact that sales of homes between $800,000 and $1 million rose more than 32% from 2012 to 2013. “It’s the safest and most popular part of the market,” according to the publisher of Inside Mortgage Finance; pointing to their appeal both to buyers and lenders.
Lenders see mini jumbo mortgages as a good way to attract new borrowers. Bank of America, who reports that 75% of its jumbo loans were under the million dollar mark, recently lowered its minimum down payment requirement from 20% to 15% to attract such loans.
And for borrowers, the interest payments that accompany big ticket (but not too big ticket) jumbo mortgages can maximize the tax advantages of home ownership. For some Real Estate Kenai jumbo mortgage candidates—especially those who don’t intend to stay in the same home for 30 years—jumbo mortgages can make irrefutable financial sense. Whether your own plans include regular, mini jumbo, or traditionally-defined jumbo mortgages, the first step is finding the right property…which is your cue to give me a call!